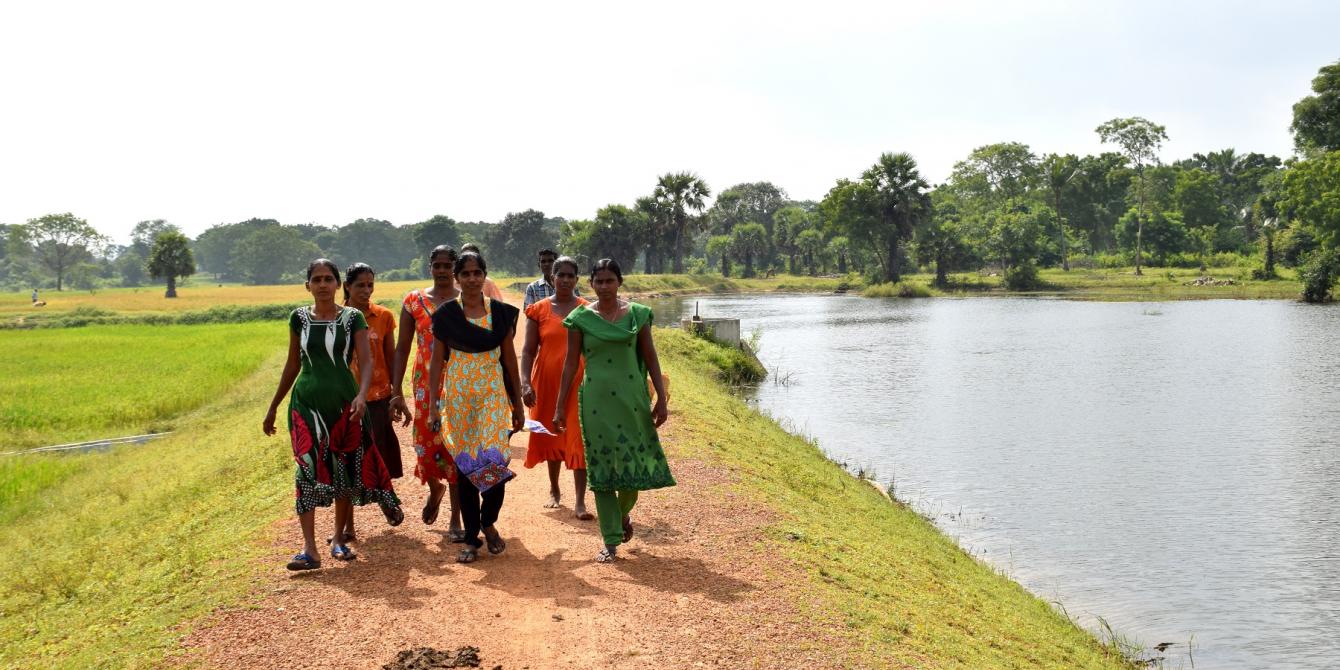 2015 North-East monsoon season has been one of the better ones for the community in Vavunathivu. They’ve received plenty of rain for the “Maha” paddy cultivating season, but unlike in the previous years, there hasn’t been devastating floods. The settlement surrounding the Puthumandupatthady Irrigation tank is rather a pretty sight. The paddy fields are vibrantly green, and the cattle feed freely in the adjacent pastures. On the road the surrounding the pristine blue water body, women walkabout in colourful attire reflecting the vivacity of their culture, children ride their bicycles, and occasionally, a motorcycle or a tractor passes you by.

In the past though, things have been more difficult.

Floods, Droughts, and Many Problems

Before the tank was renovated, the bund couldn’t withstand floods during a heavy downpour and the paddy fields will often get inundated. During the disastrous 2010 floods, the community lost their entire harvest from all 216 acres cultivated. Floods during the following years caused on average a loss of about 100 acres. Rice is their main produce, and if any harvest is lost, villagers had little in choice of generating alternate income. “We tried to get by with whatever money and resources we had, and it was a struggle to find part-time wage work. So we limited what we buy, and this includes food”, says Sridevi, a mother of four children.

During heavy floods, the accesses road on the tank embankment went underwater. This meant that movement is restricted, and according to Yohalaxmi, “we were scared of drowning, especially our kids, so we made them stay home”. In addition to stopping children from schooling, when the road was inundated, transport links between villages and to the town were broken, in turn putting a halt to most livelihoods activities and making it difficult for the communities access even the essential goods and services. In the worst cases, like in 2010, relief assistance came through boats. Since then, before the rainy season starts, they’ve been stocking food and other essentials anticipating floods.

Floods meant dire consequences for Yohalaxmi. As her house had been on the waterfront and the same ground level as paddy fields, even a minor flood of one and a half feet meant she had to vacate her home and find shelter with her relatives for a week every year.  With the assistance of the project, now her house and the garden are earth-filled and raised by two feet.

During the dry season, there was no water for cultivation, and villagers and their cattle had to walk far to find water. In addition to the villagers, 5,000 cattle and goat depend on the tank for water, and things got particularly difficult between July and August. This was a heavy burden on women, who usually fetch water for their families and look after livestock.  Sridevi tells us that she not only looks after her cattle, but also her neighbours’, and 30 animals in total. During the wet paddy cultivation seasons, she takes them to the nearby feeding pastures, so that the cattle won’t harm the paddy cultivation. During the dry season, she had to take them much further.

With assistance of the Projects Direct intervention by Oxfam and partners, communities understood the need to recognise, prepare for and mitigate the risks of disasters that affect them on a regular basis. In Puthumandupatthady, the main threats identified and mapped were floods, drought and wild elephant attacks.  Then the community finalized a plan for reducing risks, and they also identified community action for mitigation.

A key priority identified in the process was to renovate the tank. The embankment “bund” was fortified and raised by three feet to increase the water capacity and to prevent any possible floods. The tank was desilted, i.e. the tank floor was dug deeper to increase the capacity, helping it retain more water. A culvert was built too, and in partnership with the Pradeshiya Sabha (Local Council), a 500meter channel has been constructed to help disbursement of water, with the first 100m from the tank fortified with concrete.

Recognizing the vulnerability of the traditional rice varieties usually grown in the area, the farmers were introduced to a new variety that is more resilient to floods. The new variety, popularly known as “seeds paddy”, can survive flood inundation for a longer period, and is also more disease resistant. 95 farmer families in 3 GN divisions in Vavunathivu have already started cultivating the new variety. Sridevi and her family is one of the early adopters and have cultivated an acre. They now expect a better price for their paddy, as the new variety is sought after in Polonnaruwa.

The farmer community has also been introduced to Crop Insurance, with each of them supported to insure an acre of paddy. Like many other farmers, Sridevi has insured an additional acre with her own money, at the rate of Rs. 600 per annum.

With the constructions, plans in place, insurance, and awareness on the importance of disaster resilience, both physical and financial, the community is now quite optimistic about the future.