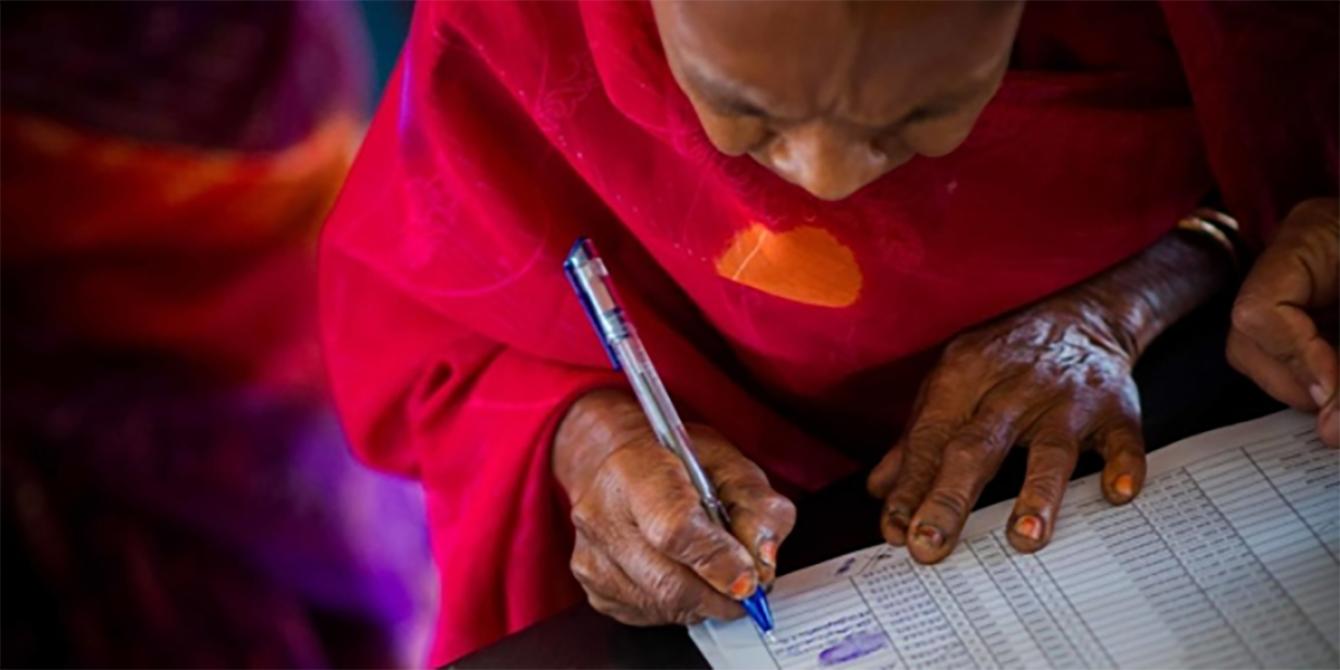 Responsive and nimble influencing approaches are particularly critical in an emergency context. This case study highlights how Oxfam in Sri Lanka and partners used their understanding of the local context and responded by influencing successfully to change bank practices to facilitate a humanitarian cash transfer programme.

In 2014, a drought disrupted the production of rice during one of the two main farming seasons. Paddy, a seasonal harvest, can only be cultivated twice a year, and the farmers rely almost entirely on the income from rice production for their survival. Many local communities, already struggling after three years of natural disasters, now faced even worse states of desperation and hunger.

Oxfam in Sri Lanka with its local partner, the Federation of Social Development Organization (FOSDO), funded by the World Food Programme (WFP), supported over 5000 drought affected people in the Mannar district through a cash transfer programme. This programme helped meet their immediate food and essential needs. Providing cash assistance, rather than distributing food or non-food items, allowed beneficiaries the freedom to choose what’s best suited their needs while supporting the local markets.

What change did Oxfam seek?

During community consultations, Oxfam learnt that many beneficiaries had obtained bank loans to support their agricultural production. Due to the drought and earlier floods, many farmers failed to harvest the yields that they had hoped for and, therefore, had struggled to repay their loans. Sri Lankan banks, as a standard practice, use deposits made by indebted customers to recover any outstanding loans they have obtained. When beneficiaries of the drought assistance programme received their cash transfers, the banks used these deposits to settle beneficiaries’ loans, rather than making the money available for withdrawal. This practice drastically reduced the effectiveness of the cash transfer programme. In response, Oxfam in Sri Lanka and FOSDO, the project partners, sought to change this standard bank practice so that beneficiaries can use the relief monies to purchase food and essential items that they desperately needed.

Oxfam and FOSDO held several meetings with the District Secretary (DS) recognizing their ability to influence the bankers in the districts. The project partners successfully convinced the DS to raise the problem with bank managers and to request them not to deduct any outstanding loan repayments from the relief assistance transfers. To support the efforts of the DS, Oxfam and FOSDO lobbied with other key government officials such as the Divisional Secretaries’ Planning Director, Ministry of Disaster Management officials, and the WFP Programme Coordinator.

As a result of the strategy, the DS wrote to bankers requesting them to amend the practice. As a result of the influencing exerted, they agreed to change their practice. The process took about a month to complete as the local bank branches required permission from their headquarters to suspend the standard practice temporarily. Despite the complexities involved, the change sought was achieved.

That the banks were influenced to change their standard practice is a testament to the successful advocacy strategy of the project. As a result of Oxfam and FOSDO’s influencing work, eight banks, including two major government banks, changed their practices to benefit the affected communities.  The successful influencing effort was built upon the following strategies:

In 2014 December, severe floods affected Eastern Sri Lanka. Oxfam launched a project to assist 15,000 households using cash transfers as a key component of the response. Influencing strategy learnt during the drought response in Mannar was replicated to successfully convince the banks in Batticaloa, Eastern Province, to release full amounts transferred to the communities, without deductions for outstanding loans. Commitments made by the banks during the drought response project in Mannar set a precedent which now benefitted the relief assistance beneficiaries in a different context.

The automated debt repayment applies across the country, and this may have an adverse impact in situations where cash transfers are credited, especially to meet humanitarian or subsistence needs. The approach adopted in this case, which was to influence the banks’ practices through the DS, may also be useful in other situations where banks need to be influenced to change their practices.

Oxfam is in discussions with the DSs to institutionalize a new system that abolishes the practice of deducting relief assistance monies against outstanding loans. Although this may not be achievable within the lifespan of this project, Oxfam will continue to work with the DSs towards this policy change.

Oxfam is planning to advocate at the national level to convince the private and government banks to adopt a more community and consumer-friendly practice. The humanitarian advocacy issue will also be raised at the national disaster coordination committee meetings.